To improve glycemic control, the patient may be recommended to add a prandial component to his/her treatment regimen. This can be achieved via the addition of prandial insulin to the basal insulin, or by replacing basal insulin with premixed insulin.

Premixed insulin is a fixed combination of a soluble fraction and a precipitated fraction of the rapid-acting prandial insulin. It is usually injected twice per day. It is an easier regimen than multiple daily insulin injections: one product only, twice per day at a fixed ratio, rather than two products, four times per day at variable doses. Premixed insulins are therefore particularly recommended for elderly patients. They are also widely used in emerging markets. However, they do not offer ideal medical performance owing to a delayed and prolonged prandial action, a basal action profile of less than 24 hours and an elevated risk of hypoglycemia.
To meet the medical need for a regimen as simple as that of premixed insulin but as effective as a multiple-injection regimen, Adocia has developed BioChaperone Combo, a combination of insulin glargine (basal insulin, Lantus®, Sanofi) and insulin lispro (prandial insulin, Humalog®, Eli Lilly) at neutral pH. For a long time, it was technically impossible to combine the gold-standard basal acting insulin, insulin glargine, and a rapid acting insulin into the same product, as they could not be formulated in the same pH range. BioChaperone® technology makes it possible to solubilize insulin glargine at neutral pH, making it compatible with any prandial insulin.
An insulin combo could become a strong option for treatment intensification, providing truly effective basal and prandial coverage. Indeed, patients could intensify their treatment from basal insulin by continuing to inject only once daily with a single product (Combo once-daily) and then, when the disease progresses, by simply adding a second injection of the same product (Combo twice-daily).

To date, BioChaperone Combo has been successfully tested in five clinical studies.

In the first quarter of 2014, Adocia announced positive results for a study that had aimed to compare the pharmacodynamic and pharmacokinetic profiles of BioChaperone® Combo to those of Humalog Mix25™ (insulin lispro premix 75/25, Eli Lilly) in people with type 1 diabetes under euglycemic clamp conditions. BioChaperone Combo showed an onset of action more than 30% faster than that of Humalog Mix25™; and BioChaperone Combo’s duration of action was longer than 30 hours in the majority of patients, while Humalog Mix25™ lasted only 18 hours. Both treatments were well tolerated.

Although this study was not designed to measure differences in the incidence of hypoglycemic episodes between the two treatment groups, a reduced number of hypoglycemic events was observed with BioChaperone Combo vs. Humalog® Mix25™. 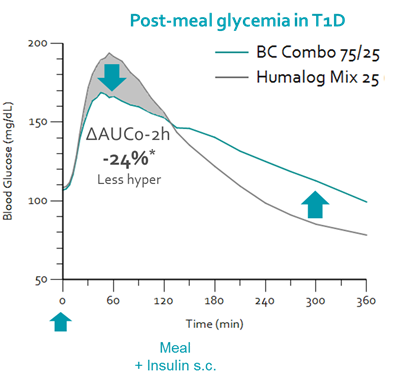 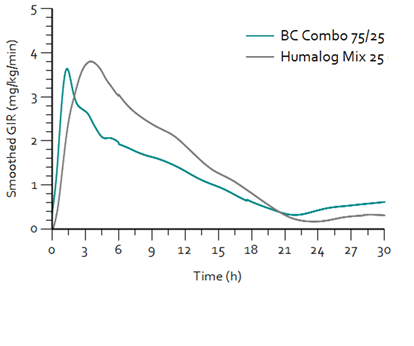 In June 2017, Adocia announced the positive topline results for a study intended to measure the effect of BioChaperone Combo injected at mealtimes on postprandial glycemic control in patients presenting type 2 diabetes compared to that obtained with Humalog® Mix25™ premixed insulin (Eli Lilly), and with separate injections of Lantus (Sanofi) and Humalog (Eli Lilly).
In this study, BioChaperone Combo confirmed a similar efficacy on postprandial control in people in type 2 diabetes to that observed in people with type 1, showing a statistically significant decrease of 18% in glycemic excursions for the first two hours after the meal compared to Humalog® Mix25™. The number of hypoglycemic episodes per patient was also significantly lower with BioChaperone Combo than with Humalog® Mix25™. Moreover, BioChaperone Combo led to at least as good postprandial glycemic control as that achieved with simultaneous and separate injections of Lantus and Humalog, and a similar number of hypoglycemic episodes per patient.

In January 2018, Adocia announced positive topline results for a Phase 1b study evaluating the relationship between insulin exposure and hypoglycemic response to the BioChaperone Combo 75/25 dose for three different doses in people with type 2 diabetes. BioChaperone Combo exhibited dose-proportional exposure and a linear relationship of hypoglycemic response to the dose when tested at 0.6; 0.8 and 1.0 IU/kg in people with type 2 diabetes. These results are essential to complete the regulatory dossier. The study also confirmed previous results showing that BioChaperone Combo acts significantly faster (prandial effect) and lasts significantly longer (basal effect) than Humalog® Mix25™.

In April 2018, Adocia and Chinese company Tonghua Dongbao announced a strategic partnership to develop and commercialize BioChaperone Combo and BioChaperone Lispro in China and other Asian and Middle East territories. In China, 65% of insulin is sold in the form of premixed insulin, and BioChaperone Combo could present significant medical benefits over those products.