BIOCHAPERONE® GLUCAGON GLP-1 FOR THE TREATMENT OF OBESITY

Obesity is defined as an excessive accumulation of fat in adipose tissue negatively impacting the well-being and health of the person. A person is diagnosed as obese when his or her body mass index (BMI) is more than 30 kg/m². The increase in weight is the consequence of an imbalance between energy intake and expenditure. This imbalance results from a complex combination of environmental, behavioral and genetic factors.

The World Health Organization (WHO) estimates that there were 650 million obese adults in the world in 2016, or 13% of the world’s population.

Based on this promising research and its BioChaperone Glucagon formulation, Adocia has developed BioChaperone Glucagon GLP-1, a two-in-one combination of human glucagon and exenatide (Byetta®, AstraZeneca), a GLP-1 receptor agonist. It has been previously shown that the combination of glucagon and GLP-1 RA works by increasing satiety, slowing gastric emptying and increasing energy expenditure. 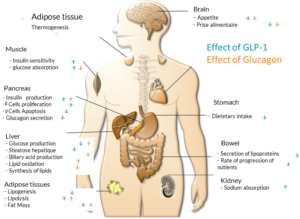 Combined Effects of Glucagon and GLP-1 on Human Body

In contrast to the multi-agonist approaches, Adocia’s formulation approach makes it possible to rely on the efficacy and safety profiles of two approved molecules, while favoring the choice of the best ratio between these two molecules to optimize the product profile.

BioChaperone Glucagon GLP-1 is currently in preclinical development, with the goal of starting the first clinical trial in humans in 2020.